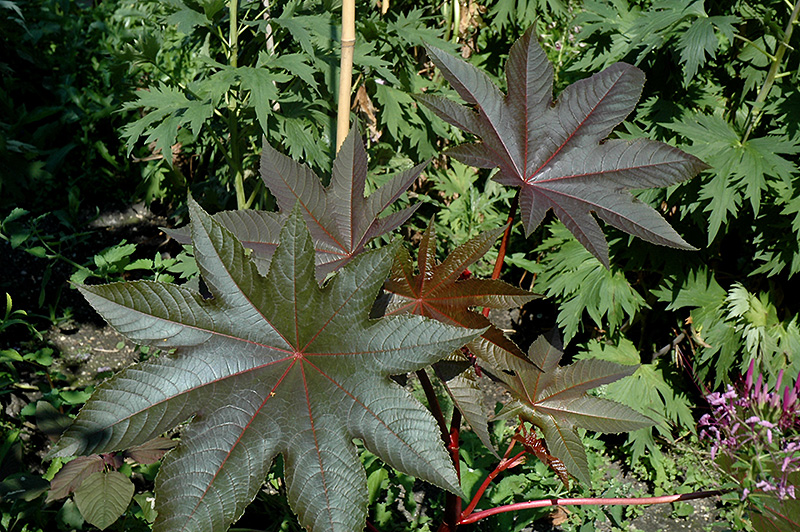 New Zealand Purple Castor Bean is an herbaceous annual with an upright spreading habit of growth. Its wonderfully bold, coarse texture can be very effective in a balanced garden composition.

This is a high maintenance plant that will require regular care and upkeep, and should be cut back in late fall in preparation for winter. It has no significant negative characteristics.

New Zealand Purple Castor Bean will grow to be about 4 feet tall at maturity, with a spread of 3 feet. When grown in masses or used as a bedding plant, individual plants should be spaced approximately 24 inches apart. It has a low canopy with a typical clearance of 1 foot from the ground. Although it's not a true annual, this fast-growing plant can be expected to behave as an annual in our climate if left outdoors over the winter, usually needing replacement the following year. As such, gardeners should take into consideration that it will perform differently than it would in its native habitat.

This plant should only be grown in full sunlight. It does best in average to evenly moist conditions, but will not tolerate standing water. It is not particular as to soil pH, but grows best in rich soils. It is highly tolerant of urban pollution and will even thrive in inner city environments. This is a selected variety of a species not originally from North America, and parts of it are known to be toxic to humans and animals, so care should be exercised in planting it around children and pets.